An Israeli startup hopes to disrupt the vegan food market by developing 3D printing technology that will be able to produce meat substitutes using plant-based formulations, saying the final product very closely resembles the experience of consuming natural meat. Its founder says it has “replicated… the complex matrix that is meat.”

Jet Eat, which was established in early 2018 by Eshchar Ben Shitrit, aims for its products to hit the markets by 2020.

Ben Shitrit, according to the Israeli tech site NoCamels, was an avid meat consumer before he set his mind on a substitute using natural, healthy ingredients, without compromising on flavor or consistency. 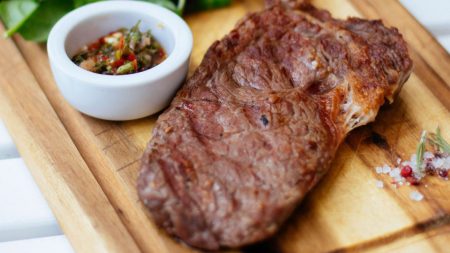 “Meat is characterized by four components: the muscle, the fat within it, myoglobin and a connective tissue” Shitrit explained. “We replicated, with our 3D printer and precise formulations, the complex matrix that is meat.”

“Israel is the birthplace of innovation in 3D printing and digital printing and is a true expert in using technology to address the problems of conventional markets,” Ben Shitrit told NoCamels. “Nowadays, digital printing is being utilized in areas ranging from organs to dentistry and I believe that, in an increasingly digitalized world, it can be applied to food as well.”

Based in Ness Ziona, Jet Eat currently has five employees and has already raised funding from angel investors. The startup is currently working on raising money from seed investors.

Jet Eat is developing its products in collaboration with the Technion-Israel Institute of Technology, and is using the institution’s labs for experiments.

The startup had earlier this year taken part in a four-month accelerator program launched by the European Institute of Innovation and Technology (EIT) Food Accelerator Network at the Technion. It was selected as a finalist to compete at the program’s Food Venture Summit for an equity-free cash prize of $68,000. The winners of the competition will be announced in Paris next week.

Israel, and particularly Tel Aviv, has seen a significant rise in people who identify as vegan, and plant-based substitutions for meat will no doubt attract many members of the community. Such substitutions could also revolutionize how the world at large eats, striking a major blow against environmental degradation, animal suffering, and global health pandemics.

Last year, researchers at the Yissum Research Development Company, the technology transfer company of the Hebrew University of Jerusalem, said they have created a 3D printing technology that will be able to produce nutritious meals, for use in homes, restaurants, and institutions, using nano-cellulose, a natural and edible calorie-free fiber. They have so far used their technology to “print” dough, but not a full meal.

What should you be using your crypto for