HyperCubes is an augmented reality platform to help children understand computational concepts drawn from their physical surroundings, from their most immediate and tangible reality. Children become creators and learn while tinkering with commands such as transformations in space that control little characters or geometry shapes.

We are still far from exploiting the full potential of augmented reality. The majority of applications being released don’t make use of the spatial awareness and the connectivity to devices and objects in our physical surroundings. As Baron Webster explained, a lot of these “superimposing demos” get limited to a kind of “Additive AR,” placing very cinematic content in front of the user. But the richness of our physical environment has so much more to offer for developing useful and very promising augmented reality applications. 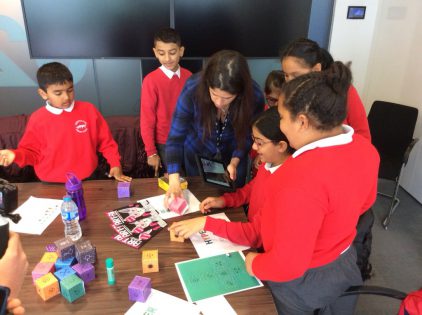 HyperCubes was created as an evolution of Paper Cubes, an AR experiment developed at the Google Creative Lab. The Paper Cubes prototype was designed as a DIY AR kit. With just some paper, scissors, glue, and a phone, anyone can explore how to make the physical world augment the digital one. The paper cubes can be used to control a crowd of stick figures–make them jump, turn, stop, or even make them smarter with the AI paper cube.

With HyperCubes the student has more freedom of creation, via a set of commands and digital content. HyperCubes incorporates tracking of surfaces along with the basic tracking of the cubes. The user can place the cubes everywhere and start building flowing systems in space, similar to traditional visual programming interfaces. Combining a meaningful use of space and tangible objects in teaching resources are key strategies that help children learn complex concepts, especially in STEM education—the Logo Turtle is the cornerstone example for this. Now, we have the possibility of expanding it into 3D space with digital, animated content. Children become creators and learn while tinkering with commands such as transformations in space or Recurrent Neural Networks that control the little characters. Infinite opportunities open up where the children can be artists, coders, and just kids having fun and learning at the same time.

Pandemic failure or convenient scapegoat: How did WHO get here?

Seven Digital Marketing Trends You Must Use in 2019