In its latest forecast release, Canalys projects global 5G smartphone shipments will reach nearly 280 million units in 2020, with 62% of these in Greater China, followed by North America and EMEA. Overall smartphone volumes are projected to decline 10.7% in 2020 compared with 2019, while a rebound of 9.9% is expected in 2021, with the market to exceed 1.3 billion units.

“Global smartphone shipments are rebounding rapidly in many markets ahead of the economic and retail consumption recovery,” said Canalys Senior Analyst, Ben Stanton. “Smartphone vendors have relentlessly pushed new product launches, as well as online marketing and sales during the post-lockdown period, generating strong consumer interest for the latest gadgets. Gradual reopening of offline stores, improving logistics and production have provided necessary uplift for most markets to move into a more stabilized second half of 2020. And with the holiday season about to kick off, there is no doubt 5G is about to be thrust into spotlight.” 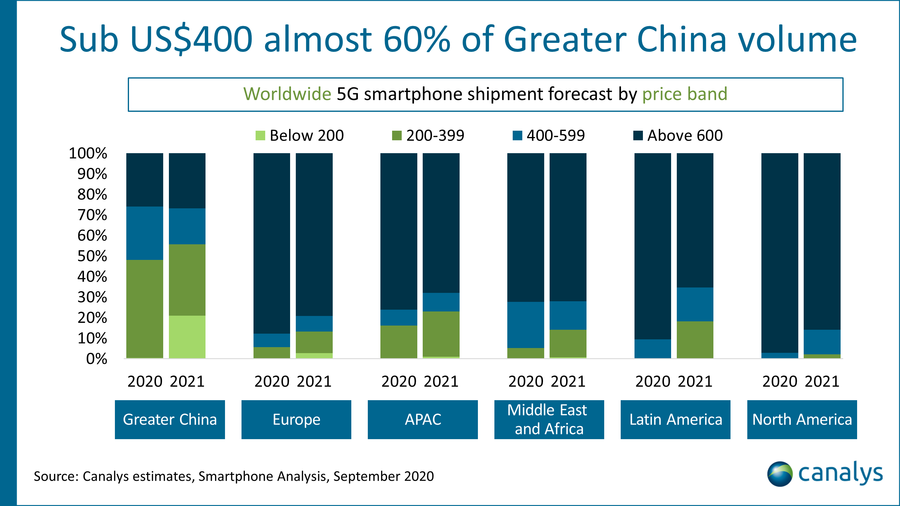 Canalys sees the rapid commoditization of 5G smartphones in mainland China as a critical factor behind the huge 5G smartphone shipments this year.

“As Realme launched its V3 in September, the first sub-US$150 (RMB999) 5G smartphone in China, 5G officially becomes a feature for entry-level smartphones,” said Canalys Analyst, Shengtao Jin. “This milestone has arrived three months earlier than expected and will have a significant ripple effect in other regions, such as Southeast Asia, EMEA, and even Latin America where Chinese vendors are expanding.

“The economies of scale provided by the China market will allow vendors to launch more affordable 5G smartphones in other countries, even if 5G infrastructure in those markets is not fully ready. It is expected that by 2021, nearly 60% of 5G smartphone shipments in China will be cheaper than US$400, while 5G penetration in China will reach 83% in the next 12 months,” commented Jin.

Europe will be the third largest region behind Greater China and North America in terms of 5G penetration in 2020 and 2021, driven by multiple forces.

“Fairly aggressively-priced 5G devices are already available in Europe, such as the Motorola G 5G Plus, and the Xiaomi Mi 10 Lite 5G. But with many Apple-centric markets, such as the UK, there is a large base of customers willing to wait for an iPhone with 5G. Another headache for mobile operators in Europe is the ongoing uncertainty around Huawei, as it looks increasingly likely that supply chain constraints will hinder its volume potential. Huawei was long-expected to play a major role in 5G smartphone adoption, and other brands such as Xiaomi, Oppo and TCL are already positioning themselves to fill any vacuum as it appears.”

All eyes on the new cloud edge

4 most common types of cybersecurity threats