Africa will define the future (especially the Bitcoin one)”, tweeted Jack Dorsey, CEO of Twitter and payment provider Square, at the conclusion of a whirlwind tour of the continent last year.

Dorsey, a Bitcoin enthusiast, has concluded that African nations have the optimum conditions needed for crypto to flourish: weak local currencies, which make it harder to get the dollars needed for global trade; complex and costly money transfers, and—perhaps most importantly—an enthusiastic, youthful, tech-savvy and increasingly desperate population.

Nowhere in Africa is this more true than in Nigeria, which leads Africa in trading volumes on person-to-person (P2P) crypto exchanges Paxful and LocalBitcoins. The western African nation (average age 18) is a tech hub; consistently tops the charts for Bitcoin searches on Google, and according to one survey, has the highest percentage of crypto users in the world. But most compelling is evidence that Bitcoin inventor Satoshi Nakamoto’s original use case, for Bitcoin as a payment tool, is positively thriving in Nigeria.

Bitcoin as a necessity

In Nigeria, Bitcoin is “a necessity as opposed to a luxury or this cool thing that you could use,” Akin Sawyerr, a US-based crypto investor and ecosystem builder, who is part of the operations team at risk protocol Barnbridge, told Decrypt. “For a lot of people, it’s basically a lifeline to keep their businesses going.”

Sawyerr, who was raised in Nigeria, explained that sub-Saharan Africa is the most expensive place to move money into. Now, the tumbling price of the country’s oil—a direct result of the coronavirus pandemic—has wrought economic strife, and led to two devaluations of the Nigerian Naira. In November 2020, the nation officially went into recession for the second time in five years.

“Nigeria’s weakening Naira currency, as well as the shortage of US dollars, are forcing businesses to switch to Bitcoin as the means of settling payments for international transactions,” Amos Samson, Nigeria manager at remittance service Sirocco Pay, confirmed to Decrypt.

Nigerian businesses need dollars to buy new supplies, and order essential equipment from abroad—but formal sources for obtaining foreign currency, such as banks, are failing to meet this demand, he further explained.

The situation is so dire that, according to Nigeria’s leading financial publication BusinessDay, some of the country’s Bureaux De Change (BDCs)—popular destinations for foreign currency exchange—have attempted to educate their customers about the use of Bitcoin, because they’ve been unable to meet the high demand for dollars. Their efforts are now reportedly bearing fruit, with plenty of businesses switching to Bitcoin for international trade.

See more: Why Nigeria is a global leader in Bitcoin trade

Meanwhile, crypto services—exchanges such as Binance, and P2P marketplaces such as Paxful—have been stepping in to fill the void. In the second quarter of 2020, Nigeria’s P2P Bitcoin trading weekly volumes doubled from $8 million to $16 million, according to Arcane Research. And in the first nine months of 2020, new registrations at Paxful more than doubled compared to the same period last year.

“With devaluation and recession causing Naira depreciation, individuals and even businesses are looking to hedge the value of their funds using a good investment tool,” Nena Nwachukwu, Nigeria regional manager at Paxful, told Decrypt.

She added that Bitcoin’s current surge had certainly attracted people’s attention. “I now receive many questions about Bitcoin from family members and friends who previously had zero interest in cryptocurrency,” she said.

The evolution of Bitcoin adoption in Nigeria

Paxful now has 600,000 Nigerian users, and according to Nwachukwu, the way people are using Bitcoin has grown too. Common use cases are cross border transfers, inbound remittances from Nigeria’s diaspora (who sent an impressive $23.6 billion home in 2018) and payment for school fees, suppliers and freelancers, she said. But now Bitcoin is also used as a second source of income, a hedging tool, and has even funded a human rights protest, after banks suspended organizers’ accounts. 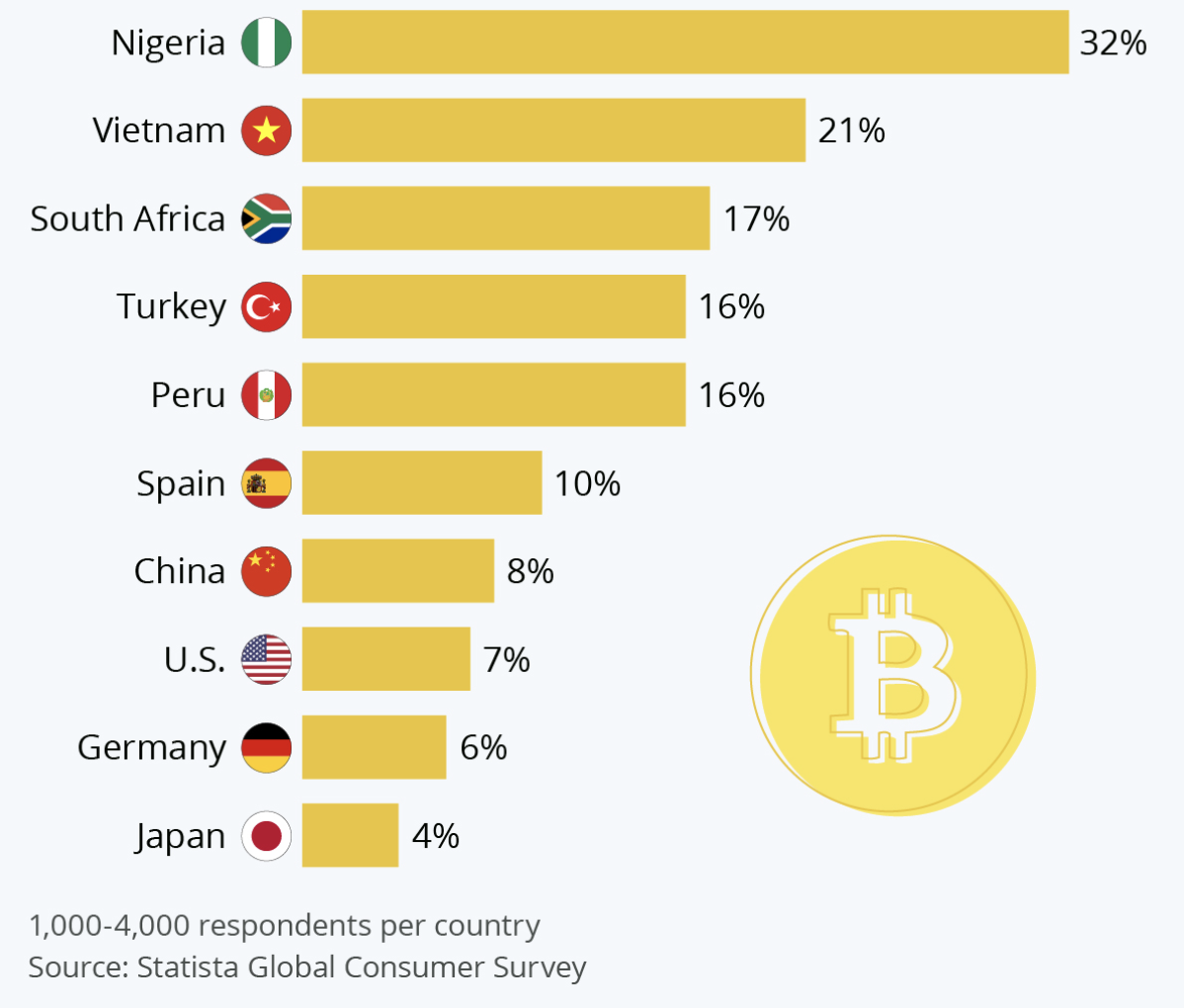 Reports also suggest that increasing numbers of traders are using Bitcoin to pay suppliers. Chinese suppliers, in particular, are keen to do business in Bitcoin for its speed and convenience. It also means Nigerian businesses no longer need to buy dollars using Naira or shell out fees to money-transfer firms.

Nwachukwu points out that interest in cryptocurrency has grown fastest among millennials. Nigeria’s young, entrepreneurially-minded population has contributed to its success as Africa’s leading startup investment destination in 2018.

But the majority of young people are either unemployed or underemployed, and often unbanked. Even those fortunate enough to qualify for a bank account are hobbled by spending limits that can be unreasonably low, or find that their Nigerian IP addresses have been blacklisted, said Sawyerr. Bitcoin and stablecoins, which are pegged to the dollar and easy to cash out, have proved their salvation, he added.

See more: Why Africa will leapfrog the rest of the world in blockchain adoption

How Bitcoin gained legitimacy in Nigeria

Many Nigerians have shunned doing business online in recent years due to the preponderance of social-financial, get-rich-quick and Ponzi schemes, such as MMM, Twinkas and others, according to Luka Anthony, overseas manager for Chinese financial services startup GetBit. The scams have tainted the image of cryptocurrencies in the country, he argued—but recent events have given Bitcoin a shot of credibility.

The police unit stands accused of extortion, torture and murder. Many of those targeted are young males who work in the tech industry. Yele Bademosi, CEO of Binance-backed payments app Bundle, recently shared his own chilling encounter with SARS.

In October, while the hashtag #ENDSARS went viral, Bundle, as well as other Nigerian startups and organizations, raised money for the decentralized protests which were spreading throughout the country. But some groups of local activists, like the Feminist Coalition, had their bank accounts frozen. In desperation, they turned to Bitcoin. Donations poured in, and Jack Dorsey even promoted the cause on Twitter. Ultimately, the group ended up raising over $150,000 in Bitcoin—more than 40% of their total funds.

“A lot of people were introduced to the utility of crypto and Bitcoin for the first time during #ENDSARS,” said Bademosi, speaking on the Breakdown podcast recently. “They were learning, ‘What is Bitcoin; how do I buy and send Bitcoin, what is an address’ … this took Bitcoin even further mainstream.”

“Truths was portrayed during the end [of the] SARS movement,” said Anthony. “People also got to learn that most youth gets paid through Bitcoin—online businesses like freelance. Many videos was made showing that not all youths are into fraudulent businesses, but probably working hard to earn online or working with overseas companies.”

Bitcoin first took off in Nigeria in 2014, but it’s much more popular now, he said. Leading brands, advertisers and influencers are taking advantage of the prevailing Bitcoin macro trend, and, this year, Nigeria got its first crypto ATM.

The future of Bitcoin in Nigeria

The plight of the Naira, the fallout from the pandemic and the efficacy of Bitcoin have combined to bring cryptocurrency to the fore in Nigeria. But what does this mean for the future?

Unsurprisingly, Nigerians’ quiet adoption of Bitcoin has not escaped the attention of the financial authorities. The country’s Securities and Exchange Commission recently ruled that all cryptocurrencies are deemed securities.

And there are signs that more regulation is on the horizon. The publication of a draft framework for a National Blockchain Adoption Strategy, in October, brought with it hope that such a move could revitalize the economy.

Why Africa is the new crucible of crypto

Just like the explorers of a bygone age, Jack Dorsey came away entranced when he visited Africa for the first time last year. The Twitter and Square CEO is a big Bitcoin fan and investor—and d…

“Nigeria has greater chances of coming top if they reshape and adopt blockchain,” said Anthony. “We have many [natural] resources, and if the government can integrate blockchain through Nigeria oil, it could be easier to back [the] Naira, and also bring more mass adoption.”

The framework includes comprehensive regulatory oversight. But observers, such as Sawyerr, think that restrictive regulations don’t make sense in the current economic climate, and that it’s unlikely the new rules will have teeth due to lack of resources.

Banning Bitcoin would mean destroying businesses, and economic growth, because there is not enough foreign currency to meet demand, he said: “It really doesn’t make sense for them to squeeze the market when, in the Nigerian case, Bitcoin is solving a real problem for people.”

Africa’s overall trading crypto volumes are tiny, a mere two percent of global volumes, but the emergence of Bitcoin and other cryptocurrencies create life-changing value here, compared to other regions, said Sawyerr.

“I don’t want to underestimate how big that is,” he added. “It’s allowed people to operate businesses where they couldn’t before; it’s allowed young people to have some level of sovereignty and independence and allowed them to create value—to be paid for it in this way—that’s huge.”

The myth and deception of ‘Smart Cities’ in Africa