Home Africa Cryptoeconomy: Why is crypto adoption growing in Africa?

Africa is going through an economic revolution never seen before. Interestingly, the process has nothing to do with outdated economic policies or commercial banks-enabled transactions but virutual currency adoption. Africa has already adopted mobile money like MPesa; experts predict that the market is ripe for another wide adoption of crypto.

Reuters in September 2020 reported that cryptocurrency transfers reached a peak of USD 316 million last June. Three countries that account for most of the transactions are Nigeria, South Africa, and Kenya. What is unique is crypto for commercial transactions, unlike other parts of the world, where cryptocurrencies are used mainly for financial trading.

Let’s find out why Africa is becoming a fertile ground for virtual currencies.

There are several factors at play in fueling the crypto growth in Africa.

A big part of income for many African countries is remittances from diaspora abroad. According to World Bank, remittance flows to sub-Saharan Africa for 2019 were close to USD 48 billion. Nigeria received almost half of the total remittances sent to this region, USD 23.8 billion.

The World Bank report also states that it is costlier to send money in sub-Saharan Africa than most other regions. On average, a sender occurs an 8.9% cost to send money to their home country. On the other hand, the global average for the same stands at 6.8%.

Many Nigerians are choosing to use cryptocurrency to send money across borders over Naira. Instead of sending money via banks, they transfer money through bitcoin remittance company. Sending remittances through these platforms bear almost no cost or much cheaper than banks. It helps people to avoid bank fees and currency conversion charges.

To give you a snapshot of the wide adoption of virtual currencies, look at the number of transfers from Jan to June 2020.

In the last decade or so, many African countries have gone into an economic tantrum with skyrocketing inflation and devaluation of national currencies.

For instance, the World Bank reported that South Sudan’s inflation rate was roughly 102% between 2016 and 2017. Other countries facing higher inflation & currency devaluations included Nigeria, Zambia, Ghana, Kenya, Mozambique, and Zimbabwe. It shouldn’t be surprising to find out some of the biggest crypto economies are also these countries. The primary drivers of the African bitcoin economy are Ghana, Kenya, Nigeria, South Africa, and Botswana.

Just five years back, when Zimbabwe was facing hyperinflation, some young Zimbabweans turned to Bitcoin. Similarly, many people from Nigeria, Kenya, and others joined the cryptocurrency bandwagon. They saw virtual currencies as a safer means to transact and avoid their inflated currencies or store value against USD as compared to their national currency.

The major example of this is Nigeria, where is the crypto adoption is one of the highest in the world.

According to a survey report of Statista, Nigeria ranked first, with 32% of people saying either they have used or owned the cryptocurrency.

Although Nigeria has been recovering from recession rapidly, the economic woes continue for Nigerians. The global pandemic COVID-19 further aggravated the situation. Last year, the Central Bank of Nigeria devalued Naira by 24%, prompting citizens to look for other alternative income sources. The cryptocurrency trading and use of bitcoins for transactions seemed attractive to many Nigerians. Moreover, many businesses have added crypto plugins to make phone payment options.

Another major reasons why Africa has high crypto adoption is said to be the lack of banking infrastructure.

Mobile money platforms such as MPesa have helped provide banking access to millions of Kenyans in the last few years. People not having access to traditional banking systems in rural areas in Kenya use digital platforms to transact.

It is no surprise why cryptocurrency has become attractive to many Africans, who are already familiar with concept of digital money wallets, according to financial experts.

1. Not a value store

Cryptocurrency is not without its challenges. Firstly, Bitcoin and others are not legal tenders in many African countries; many African central banks have clarified multiple times.

That means there is no safety valve if you lose from your crypto account. Converting local currencies into bitcoin is a complex process, often mediated by informal brokers.

Apart from being largely unregulated, cryptocurrency is very volatile in nature. Short-term investors are at risk of losing a hefty amount due to a downfall in crypto values.

For instance, the value of a bitcoin has skyrocketed since June 2020. 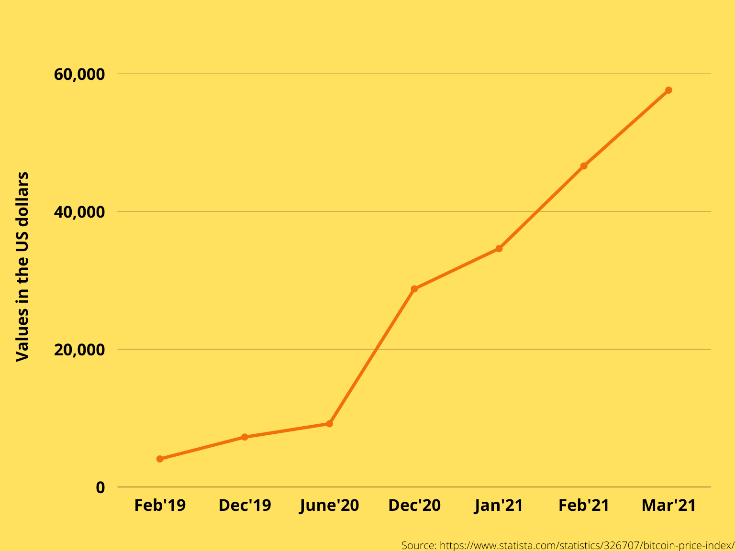 2019 to 2021 has been a remarkable period of growth for cryptocurrencies, especially bitcoin. The above line graph shows how one bitcoin’s value from USD 3500 has now reached close to USD 60,000. But this is half the story. Bitcoin values often plunged by 10% or more in quick succession, which can be detrimental for small investors in Africa.

How do you determine a value of a share? –  by looking at financial reports, balance sheets, income statements, and so on.  But how about a bitcoin? There is no actual data to wrap your head around. There are only transaction sentiments that fuel the value of a bitcoin.

b. Utility or Usage problem

There are roughly 18.51 million Bitcoins in circulation, but only few investors hold almost 40% of the total supply. This means that a few million Bitcoin are actually available for transactions, which is relatively small compared to the global GDP, making it difficult to be used for transactions as per some experts.

Still, only a few businesses accept virtual currencies as payment.

b. The bubble can burst

There is always a risk of rapidly rising investment bubbles eventually burst. History suggests that every volatile asset has a higher risk of losing. Compared to other forms of investments, bitcoin is a highly volatile and risky investment that is not backed by anything & driven by sentiment.

According to Trade Forex Kenya, most of the people in Kenya, Nigeria & other African countries are interested in cryptos because they see them as a lucrative investment with high potential returns. Many Africans easily fall for scams such as MMM, that promise high returns & regular income. There has been a significant rise in number of fake crypto trading & similar scam websites that promise returns in the name of crypto & other financial investments.

Central Bank of Nigeria (CBN) issued statement that cryptocurrencies are increasingly being used for money laundering and other illegal activities.

People with no experience in blockchain technology or understanding of cryptocurrencies are at a higher risk of falling prey to crypto-scams or investing through the wrong channels. It’s easier for people with some background in technology, but a vast section of African crypto traders is attracted towards lucrative returns rather than underlying technology.

There are currently no regulators for cryptocurrency in most countries, and this poses a severe risk for ordinary investors. There is no escape route or way of getting the money back once the virtual currency crashes or there is some scam.

Many regulators see cryptocurrencies as an economic risk to their country.

In Feb 2021, the Nigerian Central Bank instructed the commercial banks and other financial institutions to close accounts dealing in currencies, citing cryptocurrency as a threat to the Nigerian financial system. It has some truths because there is no way to find where the cryptocurrency originated; anonymity is a big concern for regulatory authorities worldwide.

Five of the top smartphone apps in Africa